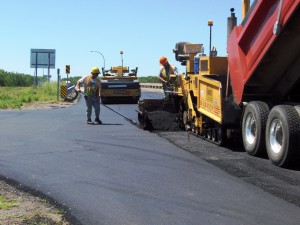 What does it mean when the economy discourages investing, designing, and building? A general lack of development interest, which is exactly what we’re seeing here in the U.S. It shouldn’t be a surprise. If you see a lack of employment in the engineering and design sector, it usually means the pipes are sealed on new projects and the lights are off on new construction.

Well, in terms of supply and demand, this means that demand for construction materials is at a large low at the moment, and with an increased supply, it seems prices have dropped significantly. An article posted in The American Surveyor today caught my attention. The U.S. Labor Department released a producer price index (PPI) report on the 20th of October saying construction materials prices are down 8.2 percent since September 2008.

Associated Builders and Contractors Chief Economist Anirban Basu says that, “After rising for the previous month, the trend of falling producer prices was reestablished in September… There appears to be a competition of forces impacting producer prices, and the net result has led to reasonably small shifts in prices on a month over month basis.”

Of course, with these great prices on the table, if you have the money to spend and you’re in the market for improving your infrastructure, now is the time to do it. And what seems to be the best buy as we approach Black Friday? Asphalt!

Asphalt producer and contractor Larry Lemon, chairman-elect of the National Asphalt Pavement Association, says that “Asphalt pavement is the buy of the year. There are a couple of reasons for this. For one, with the economy causing a slowdown in construction activity, competition is fierce. Also, the price of asphalt cement is lower than it was last year. What it adds up to is that owners and road-building agencies are getting a great price.”

An article last updated yesterday by ForConstructionPros.com clued me in on this scoop. It lists examples of projects around the country that are illustrating asphalt’s cost-effectiveness at the moment. Tax dollars allocated for repaving will certainly be getting “more for their money”, so State Departments of Transportation should take a big note here to take the biggest advantage of this opportunity as soon as possible.

Lemon goes on to say that “All the state DOT engineers across the country should be aware that their dollar will go at least 30 percent farther in 2009 than it would have last year. Now is the time for America to renew our roads and highways by milling the surface for recycling, and then placing a new asphalt overlay. The traveling public will be getting a new road that is smooth, durable, safe and quiet. And the road agencies will be getting their best value.”

by Mike Roselli |
Comments Off on Asphalt, liquidated |
Engineering