You are here: Home » Engineering » Autonomous Vehicles Are Coming

Cars, trucks, busses, trains, and construction equipment. What does the future hold for these machines? Autonomous navigation and control. Most people would think this technology is far into the future, but the exciting (and perhaps daunting) prospect is that the technology is here and the advantages and disadvantages of it will be a reality sooner than you might think. 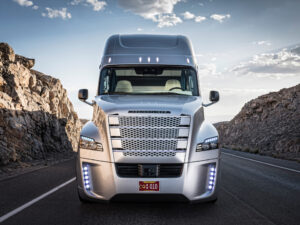 The major auto manufacturers as well as new technology players in the game including Tesla, Google, Uber, and even Apple are all working to perfect this technology right now, but there are even smaller companies that are working towards these goals.

Arstechnica recently reported that Freightliner has unveiled the first road-legal self-driving truck. But not only are these technologies coming, the research and development has become brutally competitive. Uber, the company that quickly turned people and their smartphones into one of the largest car-transport services in the world, has recently snatched 40 robotics researchers from Carnegie Mellon to work on their projects including autonomous vehicles.

But what does this mean for the future?

This will certainly make a substantial impact on the economy, and it’s one that most people either are not anticipating or are unconcerned about. We’re not just talking about jobs associated with taxi cabs and chauffeurs, but bus drivers, food deliveries, parcel deliveries (think autonomous USPS, UPS, and FedEx vehicles), and heavy tractor-trailer deliveries between stores and distribution warehouses. Truck driving is a huge industry and is the most common job in 29 states because it has historically been immune from automation. Very quickly, an enormous percentage of this chart will be removed to make way for autonomous vehicles:

This doesn’t account for railway, subway, streetcar, light-rail, ferry, cargo ship, or airline applications, but where automation isn’t present in these industries already, it’s on it’s way. Automation is certainly on it’s way to the construction industry. The Calgary Herald reports that some of the biggest mining trucks in the world will become automated, and well paying operator jobs will be laid off.

What jobs will take the place of these varying transport positions? Engineering, robotics, software, and research jobs of course, but this won’t generate nearly as many jobs as will be lost.

There are other ways this will affect society and the economy of course. Many expect vehicle ownership to drop significantly, especially with the ability to request an autonomous vehicle to be present when needed. This will reduce the need for personal ownership, or the number of vehicles owned by a single family. It will also have implications on motor vehicle theft, fuel efficiency, and even productivity as more people are able to be productive on their way to the office. And last but not least, safety. Your future autonomous vehicles may not drive as aggressively as you may wish, but it will not drive distracted, drunk, or hurriedly.

Manufacturing, hardware, and software industries are driving much of this technology forward. There is one engineering field, however, that hasn’t particularly looked at research of autonomous vehicles and their implications: civil engineering. What we know about traffic will change substantially with smart, autonomous vehicles that can reroute themselves on roads. The technology for smarter traffic networks that can redirect traffic instantly to demands as needed hasn’t been realized as well as was predicted years ago; instead, most traffic signals and networks rely on technology that is quite old, and unfortunately, demand for autonomous vehicles is not going to wait for these network ideas to come to fruition.

The ability to network vehicles and recommend alternative routes, or even alert drivers of collisions, evacuation routes, and nearby emergency vehicles are just some of the advantages we have yet to realize, and many of these ideas and others will be implemented by manufacturers in each vehicle instead of part of the roadways, giving drivers radically different experiences from different products and data sources such as mapping companies. Each vehicle will affect others on the road as well. There will likely be affects on traffic that we will not anticipate until roadways reach a certain “saturation” point, and we will being to see the very interesting affects of how different manufacturer’s vehicles reroute traffic around traffic already being re-routed.

If, however, smart vehicles are able to communicate regularly with newer road networks, a much more data-friendly world will become available to traffic forecasters and planning boards. When more precise data on local vehicle ownership rates, traffic counts, tourism traffic, and time-of-day utilization are available, design and construction of better roadways and roadway improvements will become available.

While I’m apprehensive and concerned about the loss of transportation positions and the impact this will have on the economy in the future, automation has always and will always be the natural progression of every industry. With regard to traffic problems of the future, I’m interested to see where the industry takes the need for traffic engineering; will the industry continue in it’s current shape as traffic engineers are mostly employed by government agencies or roadway device manufacturers, or will most of the algorithms be performed by individual vehicle manufacturing companies? There will certainly be a need for more traffic engineers in the future, though roles may begin to open at more end product companies in their software and programming departments.

As for me, I’m personally excited about the prospect of owning my own autonomous vehicle, and looking forward to the day when lives are saved by autonomous vehicles taking control from sleepy, distracted, or intoxicated drivers.