“I remember the first meeting where I actually told a city council that it was costing more to recycle than it was to dispose of the same material as garbage,” she says, “and it was like heresy had been spoken in the room: You’re lying. This is gold. We take the time to clean it, take the labels off, separate it and put it here. It’s gold. This is valuable.”

But it’s not valuable, and it never has been. And what’s more, the makers of plastic — the nation’s largest oil and gas companies — have known this all along, even as they spent millions of dollars telling the American public the opposite…

Larry Thomas, Lew Freeman and Ron Liesemer, former industry executives, helped oil companies out of the first plastic crisis by getting people to believe something the industry knew then wasn’t true: That most plastic could be and would be recycled…

“I don’t think anything has changed,” Thomas says. “Sounds exactly the same.”

What makes our actual situation unprecedented in personal computing history isn’t that one company has maintained a decade-long CPU performance edge over the rest of the industry, but that that one company is keeping those chips exclusively for its own devices.

Seems like The Cook Doctrine is continuing to pay off.

The Most Poisonous Mushroom

Craig Childs, for The Atlantic:

“Poisonous snakes, reptiles, plants, [and] fish have aposematic coloration that shows off that they are poisonous. Mushrooms don’t,” Bunyard said. “The dangerous ones are all mostly drab or brown, green-brown, bronze. There’s nothing in the taste that tells you what you are eating is about to kill you.”

by Mike Roselli |
Comments Off on The Most Poisonous Mushroom |
Engineering

David Frum, in The Atlantic:

If a Republican Senate majority leader from Kentucky is willing to squeeze Illinois state pensioners, why would he care about shielding Illinois state taxpayers? The answer is found in the third of the three facts of American fiscal federalism. United States senators from smaller, poorer red states do not only represent their states. Often, they do not even primarily represent their states. They represent, more often, the richest people in bigger, richer blue States who find it more economical to invest in less expensive small-state races…

A federal bankruptcy process for state finances could thus enable wealthy individuals and interest groups in rich states to leverage their clout in the anti-majoritarian federal system to reverse political defeats in the more majoritarian political systems of big, rich states like California, New York, and Illinois.

…McConnell seems to be following the rule “Never let a good crisis go to waste.” He’s realistic enough to recognize that the pandemic probably means the end not only of the Trump presidency, but of his own majority leadership. He’s got until January to refashion the federal government in ways that will constrain his successors. That’s what the state-bankruptcy plan is all about.

The 20 Best TV Dramas Since ‘The Sopranos’

And speaking of the New York Times, here’s another article I enjoyed this week. While I haven’t seen all these shows, ‘Lost’ had such a significant impact on my opinion of what a modern TV drama should be. To this day, the writing and execution continue to amaze me. The interview from Damon Lindeloff was particularly close to home:

The theory that continues to drive me bonkers is the idea that they were dead the whole time. That makes no sense to me… It definitely creates some brow furrowing. But I’ve decided that on my tombstone it will say: “Here lies Damon Lindelof. He was dead the whole time.”

Mr. Perry, who once called for the elimination of the Energy Department, will begin the confirmation process Thursday with a hearing before the Senate Energy Committee. If approved by the Senate, he will take over from a secretary, Ernest J. Moniz, who was chairman of the Massachusetts Institute of Technology physics department and directed the linear accelerator at M.I.T.’s Laboratory for Nuclear Science. Before Mr. Moniz, the job belonged to Steven Chu, a physicist who won a Nobel Prize.

For Mr. Moniz, the future of nuclear science has been a lifelong obsession; he spent his early years working at the Stanford Linear Accelerator Center. Mr. Perry studied animal husbandry and led cheers at Texas A&M University.

To say that Mr. Perry’s background and education are insufficient for the duties and responsibilities required would be a gross understatement.

Casey Newton, reporting for The Verge:

The path forward for Aquila isn’t totally clear, and it’s bound to encounter more bumps along the way. But Zuckerberg is resolute: billions of people who can’t access the internet deserve it. And for Facebook to achieve his long-term vision, everyone is going to need access to more bandwidth than they have today.

Sounds very humanitarian. Until you remember that Facebook makes it’s money through advertising, and can only show year-over-year growth if more users are connected to Facebook than the year before. Once you’ve hit the saturation rate for your population, the only way you can increase revenue is if you can access more population. Facebook has become so enormous, if it wants to continue to grow it’s user base, it has to literally invent the technologies needed to push internet connectivity to the rest of the planet.

by Mike Roselli |
Comments Off on The Verge: ‘Facebook takes flight’ |
Engineering

Scientists regard vegetative buffers as the most cost-effective and fair means of controlling polluted runoff from farms and developments; the Senate budget would have them repealed and would schedule the repeal of state requirements for buffers along the Neuse River, the Tar-Pamlico River, the Catawba River on December 31, 2019— even if no alternative is in place.

“This provision isn’t a tweak, it’s a sledgehammer,” said Molly Diggins, state director of the North Carolina Sierra Club in a statement. “It is as if the Senate has forgotten how important our waterways are for tourism, recreation, and drinking water.”

It’s not that the Republican Senate has forgotten about our waterways, it’s that they just don’t care.

Cars, trucks, busses, trains, and construction equipment. What does the future hold for these machines? Autonomous navigation and control. Most people would think this technology is far into the future, but the exciting (and perhaps daunting) prospect is that the technology is here and the advantages and disadvantages of it will be a reality sooner than you might think. END_OF_DOCUMENT_TOKEN_TO_BE_REPLACED

by Mike Roselli |
Comments Off on Autonomous Vehicles Are Coming |
Engineering, Technology 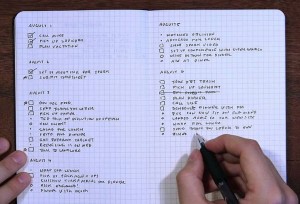 In April of last year, I decided it was time to come up with a better system of to-do’s than the sticky notes and self-emails I had been relying on. With new responsibilities at home and at work, and to-do lists piling up for all sorts of different tasks and side projects, I needed a system that would work for me to keep everything together.

Rather than invent something myself, I spent quite a bit of time researching different methods people use, and even interviewed friends and colleagues for their opinions. While interested in the idea of using something electronic (read: my iPhone), the Type-A personality in me was looking for something with check boxes that could be satisfyingly checked with a pen.

Enter the Bullet Journal. While crediting the many people that have used something similar before, Ryder Carroll presents a take on the Bullet Journal by presenting the concept through website and video tutorials. I made a concerted effort to give it a shot. I started at the beginning of April, 2014 and gave myself a few weeks to see if it would work for me. Weeks grew into months, which continued for the remainder of the year, and by December it was time to order a fresh journal for 2015.

For anyone looking for something similar, I highly recommend it. I think it’s enabled me to be much more effective at getting things done by providing an avenue to track goals for the day, week, and month. I started with the blank Moleskine Classic Large Squared and I like the flexibility this provides.

Below is a comparison picture of my 2014 journal and a new journal, showing how nine months of ink and emotion add significant thickness and weight. The outside shows it’s wear as well, but the binding is very much intact and continues to serve in an archival role on the bookshelf. 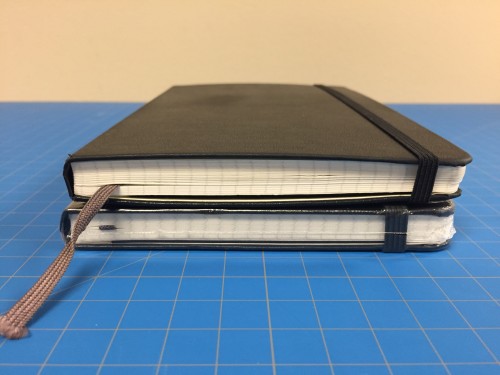