Its action shares a dynamic split screen series detailing 36 pairings of athletes and relating the kinetic movement of one sport to another. Developed through research of more than 4,000 pieces of footage, the resulting montage underscores commonalities shared by athletes around the world.

This is jaw-dropping video editing. Truly remarkable. I would expect nothing less from a company that has a long history of making a statement with its advertising.

The Truth About Dentistry

Ferris Jabr, in an extremely well researched and written piece for The Atlantic:

Whereas a typical dentist might perform root canals on previously crowned teeth in only 3 to 7 percent of cases, Lund was performing them in 90 percent of cases. As Zeidler later alleged in court documents, Lund had performed invasive, costly, and seemingly unnecessary procedures on dozens and dozens of patients, some of whom he had been seeing for decades.

It’s easy to see how dentists, hoping to buoy their income, would be tempted to recommend frequent exams and proactive treatments—a small filling here, a new crown there—even when waiting and watching would be better.

When you’re a hammer, the world is your nail. I’ve had my fair share of unnecessary medical work. To this day, I’m extremely skeptical of any proposal from any doctor, especially when there is no perceived problem or pain and the issue is discovered on a routine checkup. There is a significant and inherent conflict of interest when consumers don’t have the ability to understand the recommendations and repercussions of the medical work proposed to them by private doctors whose income is intrinsically linked to the number of procedures performed.

by Mike Roselli |
Comments Off on The Truth About Dentistry |
News

Every Building on Every Block: A Time Capsule of 1930s New York

Really neat article, photos, and interface from the New York Times with pictures spanning almost 90 years from the same spots and perspectives. Definitely worth your time if you haven’t checked it out.

by Mike Roselli |
Comments Off on Every Building on Every Block: A Time Capsule of 1930s New York |
News

Oxford Comma Dispute Is Settled as Maine Drivers Get $5 Million

For those who don’t use the serial comma, consider the matter settled. 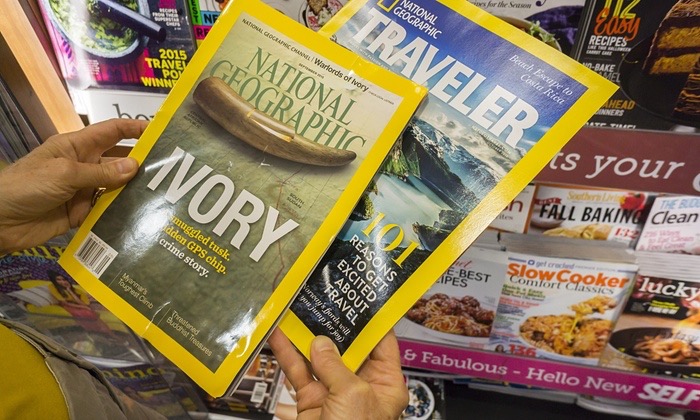 In a bold move today, National Geographic Magazine has announced a rebranding effort. Purchased by 21st Century Fox, the new “Climate-Denial Geographic” is preparing its first issue detailing the wonders of capitalism, a new sponsored inquiry showing global-cooling, and why some species are being deprecated to encourage thriving populations of more robust, human-friendly species.

To promote the magazine, Glen Beck will be featuring CDG Writers and Real Scientists (TM) on his show. The guests will discuss the magazine and the importance of giving every viewpoint the same amount of media coverage.

For a limited time, CDG will offer a genuine alligator-hide display case for your bookshelf when you subscribe. Sales representatives were clear that the 13-Issue case will indeed have room for the much anticipated “A Very Colder Christmas” special issue. The case is styled to match a similar case offered with subscriptions to Answers in Genesis Magazine, and proceeds from the case will benefit the organization.

The Heritage Foundation called the new branding “…a win for scientific inquiry in the world today”, and speculators anticipate a doubling of profits from the previous quarter. Whether new subscribers will read the first issue, or just tweet photos of themselves holding the covers to run in the monthly Coal Roller of the Month column, remains to be seen.

First attempt at a satire news post. Here’s a link to a real article about this news.