You are here: Home » Engineering » Signal Warrants and Why We Use Them

Signal Warrants and Why We Use Them 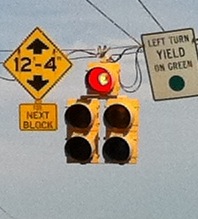 A friend sent me a link to a recent WRAL article posted yesterday about a fatal collision in Cary on Sunday, February 12th1. Tragically, both passengers in a left-turning vehicle died when the driver crossed the path of another vehicle. This is terrible and my condolences go out to those affected by the incident. I also feel for safety engineers everywhere who feel the emptiness of failure at each reported fatality2, especially the highway safety professionals who work in this jurisdiction. However, as an engineer and scientist it is of utmost importance to step back and remember a few things about working within the confines of the real world: with limited tax funds, systems are imperfect and not every collision is preventable.

Keeping these things in mind, how do traffic engineers decide if an intersection requires a traffic signal? We use a system of “warrants”, or reasons that warrant the installation of a control device. The Manual on Uniform Traffic Control Devices (MUTCD) lists nine signal warrants for varying reasons in Chapter 4C. A pdf of this manual can be found here. These reasons range from volume to school-zone related conditions and yes, even crash experience.4 Most generally, traffic signals are never installed without first qualifying for one or more warrants.

Why? In many cases a signal can make an intersection worse than it started! Traffic signals are often viewed in the public eye as a cure-all, when in fact they can have adverse affects on safety and efficiency: increased delay, increased traffic control disobedience, increased use of other routes such as neighborhoods (just to skip the light!), and others. The increased stops can also increase the number of rear-end collisions at the site as well.4 This has led to the installation of many lights that were never needed, at sites that may now be less safe, at the cost of a six figure installation. Thats right, your average 4-way simple traffic signal costs between $150,000-200,000. Plus continued maintenance from now until forever.

One of the biggest reasons that the public is so ill informed about the affects of traffic signals is the media, and we can see it in this article.2 It’s not necessarily their fault that the public demands stories that move the heart, either in tenderness, controversy, or horror. But people get so caught up in political partisan biases, that many forget how easy it is to be biased to the heart instead of the mind, allowing an element of “controversy” to develop conspiracy, scheme, even frustration in the reader. Lets take a moment to analyze some of the diction used in this article:

“hasn’t met the criteria for a traffic light, despite pleas from drivers and neighbors that the intersection is too dangerous”

I’d be pulling my hair out if there was any left to pull. On the logic side, uninformed readers could assume two very incorrect conclusions: drivers and neighbors always know a dangerous intersection when they see one3, and that pleas from drivers and neighbors warrant a traffic signal. But theres so much on the emotional side as well. Using the word “plea” to stab the hearts of our readers, the author has clearly set the tone of the entire article to:

“People have begged on hand and knee, offering to sacrifice their first born for just one, ONE traffic signal. The site would be safer, and this wouldn’t have happened”.

No wonder people think traffic signals are a cure-all! This conjecture could be patently false. For all we know without adequate evidence, adding a traffic signal could make this site WORSE. But not now. As uninformed citizens we now know that the evil city of Cary is denying us the promise of safety and security that only a traffic signal can bring.

“she attempted to turn left from West Chatham Street onto Cary Parkway and crossed into the path of a Dodge Avenger.”

This one earns the reporter kudos. Notice how quickly and easily the blame of the incident could have been shifted: 1) “she unwittingly pulled in front of traffic”, or 2) “the Dodge Avenger smashed into the side of her vehicle”. Unfortunately for the reader, we don’t know the exact cause of the collision. We may never know for sure. It could’ve easily been texting or another form of distracted driving. The author calls this collision “correctible”, though as a reader we are left unsure as to whether or not it is she or her interviewee that thinks it’s correctible and why. But by calling this collision “correctible”, the public will be wondering why correctible collisions are happening at all. And they should! But they are missing an important piece of the puzzle: some intersections are more correctible than others and warrant more immediate attention and funding, of which there is a finite amount of both.

“In addition to traffic volume and other criteria, to warrant a light an intersection would need to have had five crashes that would have likely been corrected by a traffic light in a single year.”

But I have to draw the line here, this is a complete falsehood and is misreported. Intersections do not require crashes for a traffic signal. In fact, new roads are constantly being built in conjuction with signals before they are even opened. But the remark is so instigating and confusing, it left one commenter with a terrible impression of traffic safety methods. If anything should make an engineer feel like a failure, it is the terrible miscommunication with the public that can lead to this:

Let me see if I have this right….The criteria for installing a traffic light requires multiple occurrences of either property damage, bodily harm, or loss of life. The wisdom of our city fathers leaves much to be desired. carrydoggymom, February 13, 2012 7:55 p.m

As much as a I try to avoid reading the comments section on a news website, it’s important from a public administration point-of-view to see how this fraction of the populace thinks. Some comments are enlightening, some are sad. This time, I was mostly surprised to see intelligent debate in the comments section. Mostly.

Here is the advocation that, not only should tax dollars be spent willy-nilly by those in power when they find misfortune, but that politicians should make engineering decisions. There is a problem when the politically inclined try to mingle in the affairs of those who put safety first, a perfect reason why engineers should use MUTCD warrants instead of bending to political pressure from above.

While my first instinct is inclined to agree, sight distance plays an important factor in intersection design, and it may need reinvestigation at this particular intersection. Though I imagine it was addressed and not seen as a big problem during the original design, factors such as reclassifying the speed-limit or increased volume year-to-year could play a part in changing the environment here.

I’ve driven the intersection myself, and especially during rush hour it can be difficult to turn left. The median supplies a little refuge, but not much. I glanced at the traffic volume maps, but without knowing more about peak hour data, it’s difficult to say exactly what warrants the intersection can qualify for. I’m surprised it doesn’t hit the peak-hour warrant, or even the school-crossing warrant with it’s proximity to Laurel Park Elementary. With the limited data I have on hand, I might recommend the following traffic studies to take another look at the signal warrants: sight distance study, spot speed study, and/or a volume study.5

If a light is installed in the near future, I hope it will be because it is warranted and that conditions have changed since the last inspection of the intersection. Not because of the ravings of uninformed watchers of the 6 o’clock news. We should all strive to be more cognizant of the impact media can have on the heart of the public, and how important good communication can be when working for the public sector. These efforts will make it easier to limit the affect of a tragic story in the news from opening our wallets too wide when there aren’t enough collisions to merit a new, expensive, and possibly ineffective traffic control device.

By now you should have gathered the following:

2 Responses to Signal Warrants and Why We Use Them