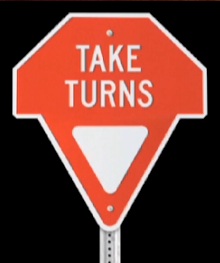 I was browsing TED earlier today (Technology, Engineering, Design), and found a few things I wanted to share. The first being a completely new road sign concept and I find it fascinating! It’s called the “Take Turns” sign, and unfortunately, due to the semantics of the English language, it may confuse you at first.

It doesn’t want you to “turn”, but to alternate vehicles when needed. Envisioned by venture capitalist Gary Lauder, the concept is half stop sign, half yield sign. When there are no cars on an adjacent side street you can drive freely, but if there are vehicles on the side street, all vehicles must stop and alternate, a la four way stop.

Perfect for scenarios where roundabouts would work but don’t fit!

The next idea that I thought garnered more attention is the initiative for open government data. At TED 2009, Tim Berners-Lee made a call for more raw data on the web, from scientists, governments, and institutions. In his video he shares whats possible. What does this mean from a traffic standpoint?

Until recently, little information on the roads in Haiti were available or usable. Immediately following the recent earthquake in Haiti, satellite photos of roads were released on the web and numerous volunteers all over the world got to work adding roads to the OpenStreetMap for Haiti. Rescue teams were able to use these maps immediately on their GPS to get to needed areas and to document blocked roads, damaged buildings, and refugee camps. Amazing.

Both videos are below. Enjoy!

One Response to T.E.D. Ideas