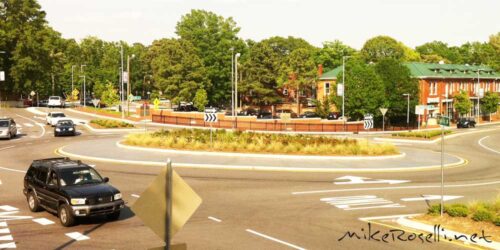 I was reading this News & Observer article today about the new roundabout on Hillsborough St in Raleigh, NC. Raleigh Police have cataloged more than 40 collisions at a new roundabout installation at it seems at least a few people have some ruffled feathers.

At first this number seems high, but it’s important to remember a few key thoughts about the safety, design and installation of new traffic patterns:

New patterns can cause collisions

It’s a fact, and one that is difficult to adjust for. New traffic patterns will confuse motorists and can cause collisions. It’s to be expected. While forty seems like a rather high number, high rates during a learning period are why safety engineers do not normally begin their investigation for at least 12 months after a new traffic pattern.

Roundabouts drastically reduce the conflict points at an intersection. While less conflict points do not necessarily reduce collisions, there are less places vehicles can collide, one of the large advantages of roundabouts.

Roundabouts also reduce the speed of incoming traffic. When drivers approach a roundabout, they approach a yield as well as a significant turning radius to enter the circle. This reduction in speed reduces the severity of collisions in the roundabout. The magic of the roundabout is that all of this is done while still reducing delays and increasing the flow of traffic!

When evaulating safety, the number of collisions is not the only metric analysts are concerned about; severity is a metric which should be considered at great length. Without looking at detailed traffic collision reports for the area, it is impossible to determine the safety of the previous intersection. However, it should be noted that roundabouts do not normally have head-on collisions. Because of this, almost all collisions at roundabouts will be of a much lower severity than at a standard 4-way signalized intersection. In fact, only one of the over 40 reported collisions had a severe injury and it involved a motorcycle.

Of course, you should be comparing to injuries and fatalities with the previous design. But how many fender benders are equivalent to severe injuries? Or fatalities? It’s difficult to draw a line here. The following is known by many as “The Old Kentucky Formula”, an easy to use equation for an Equivalent Property Damage Only index (EPDO) based on the data provided by a field officer on the scene of a reported collision:

The formula is an older one so many state agencies have developed their own. NCDOT has their own Severity Method treatment which can be found here.

A city safety analyst seems to be keeping tabs and will conduct an investigation after the roundabout has been in use for a full year. I think they should throw out, at the very least, the first six months of data plus the months of construction and signage installation time. The study may very well show areas that can be improved such as driver education, signage, pavement markings, lighting, etc. But judging from my own paths through the intersection and the severity of reported collisions mentioned in the article, there is no doubt in my mind that the roundabout was the correct treatment for the intersection, and while a few comments on the article from readers show a few disgruntled folks, many more applaud it for it’s efficiency. Give it some time and the frequency of the fender benders will reduce.

Mike Roselli is a graduate of the NC State University Civil Engineering Department. He works for the North Carolina Department of Transportation. The views expressed in this post reflect the judgement of the author and do not necessarily reflect the views, opinions, or judgement of NC State or NCDOT. 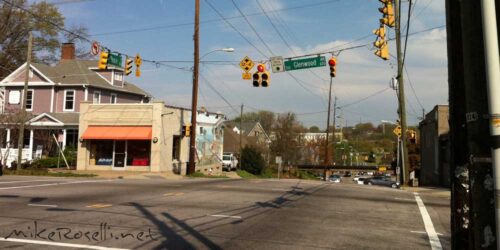 For my Highway Safety graduate level course at NC State, I conducted a field study at the intersection of Glenwood Ave and Peace St in Raleigh, NC. The study evaluated the current status of field conditions, conflicts, previous collision reports, and recommended a few counter measures that might reduce conflicts at the intersection.

I’m really enjoying the class. If you’re interested in reading the study, I’ve attached it to this post.

by Mike Roselli |
Comments Off on Safety Study |
Engineering