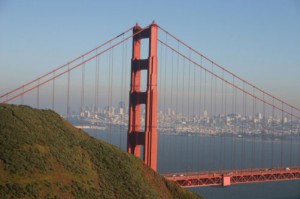 With the technology we’ve had up to today, it’s been very difficult to account for the weathering of our bridges, buildings, and other structures. State Departments of Transportation spend millions of dollars every year in testing, but current methods include many assumptions and are not always accurate. Thus accidents happen like the collapse of the Minneapolis I-35 Bridge that crosses the Mississippi.

New sensors to monitor performance are starting to become more common, but they only help if the sensor is placed at the source of a potential problem. I remember when I was working at the Constructed Facilities Laboratory at NC State, we would place sensors on key areas of beams and columns and test them for failure. Fortunately, we knew where each column and beam would fail, but bridge-systems are slightly more complicated.

New funding from the National Institute of Standards and Technology and the Michigan DOT is being spent on next-generation monitoring systems like “skins”. These skins can be painted on or exist in a layer of concrete. New wireless technology will help bring the cost of these systems down significantly, and wireless sensors have performed well in the East. You can read the full article that goes further in depth at Scientific American.

by Mike Roselli |
Comments Off on “Smart” Bridge Design |
Engineering