You are here: Home » Engineering » Waging War on Left Turns 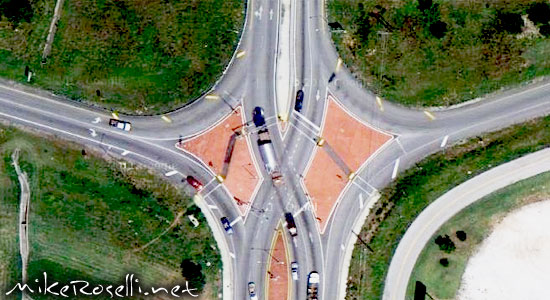 Left turns are terrible. When they aren’t extremely hazardous for drivers, they cause significant delays for other movements in the intersection because of dedicated left turn phases. Engineers have been plagued with this problem for years and have come up with many solutions, but usually the public doesn’t want anything to do with them. Even when they work exceptionally well, the Jughandle, the Michigan Left, and the all-powerful SPUI (single point urban interchange) all took time to introduce to the public. Even the roundabout is feared in areas where drivers don’t use them often, and the super-street causes uproar over driveway access to businesses. A personal favorite of mine, one I studied extensively in an unconventional intersection design course, is the Diverging Diamond Interchange. I designed a hypothetical DDI for Raleigh back in undergrad. It’s neat, but it’s been a hard press on the public to try something as different as driving on the wrong side of the road.

But out of left field comes a fantastic article from Slate, and it made the rounds on the internet this week from departments of transportation and other users on twitter, to an article in Infrastructurist. I was very excited to see something so fantastic shown in promising light because good publicity could be exactly what this idea needs to see more widespread adoption. The intersection does many things well. First and foremost, it removes left turns by placing left-turning vehicles on the opposite side of the road (on or under an overpass) before their turn, allowing them to make free-flowing turns. But it also removes a whole phase from two signals, reducing delay time and easing congestion for through vehicles, while reducing conflict points and making a safer and more efficient journey through the intersection.

Will these see wide spread adoption? Will it replace the traditional intersections we see today? It may replace a few diamonds, but not many cloverleafs; its power is best used on roads of different functional classes. If it can prove it’s worth in the ring of battle, it may see a limited adoption at problem locations. By and large, innovations such as the DDI help alleviate traffic in cat-and-mouse games of congestion, but as we continue to build suburb after suburb without rethinking sprawl, land use, and public transportation, count on seeing and learning to use even wackier intersections in the future. If you want to reduce travel time and congestion, anyway.