Its action shares a dynamic split screen series detailing 36 pairings of athletes and relating the kinetic movement of one sport to another. Developed through research of more than 4,000 pieces of footage, the resulting montage underscores commonalities shared by athletes around the world.

This is jaw-dropping video editing. Truly remarkable. I would expect nothing less from a company that has a long history of making a statement with its advertising.

REI Half Dome 2 Plus Tent Review

I upgraded my tent recently. I’ve been using an REI Quarter Dome T2 for a few years, but the waterproof coatings on the rainfly and tent bottom were delaminating. Now I’m using a new REI Half Dome 2 Plus, so here’s a quick review. END_OF_DOCUMENT_TOKEN_TO_BE_REPLACED

This past winter, I invested in some more Ruffwear gear for Kaylee. I had previously bought the Track Jacket as a reflective piece for when I let her off-leash, so I wanted to try a few other items made by Ruffwear on a winter backpacking trip in February. Today I’ll be reviewing the Palisades Pack. END_OF_DOCUMENT_TOKEN_TO_BE_REPLACED

The Road on Two Wheels

Though I haven’t written much in the past year, I’ve been logging away thoughts (engineering, and otherwise). One in particular kept resonating with me last summer when looking over some road designs: how can you design a road for all vehicles without having driven them?

Designers rarely refer to books alone, but utilize experiences that back up the numbers. You’d be hard pressed to find a transportation engineer in the United States that has never driven a car; it’s the most prominent personal transportation method here. But you might more easily find transportation engineers that have never driven a motorcycle. Or an FHWA Class 8, four-axled truck and trailer. Yet we design roads daily, sometimes with the use of simulations, sometimes with nothing more than a reference guide and our engineering judgement. But there’s a disconnect there. Last October, I aimed to remedy one part of this problem and have some fun doing it: learn how to ride a motorcycle.

I highly recommend the MSF Beginner Rider Course. In three days they have you prepped to pass the DMV rider test, without having ever ridden a motorcycle. Kim and I took the course together for fun and we had a blast. Click here to find a course near you. 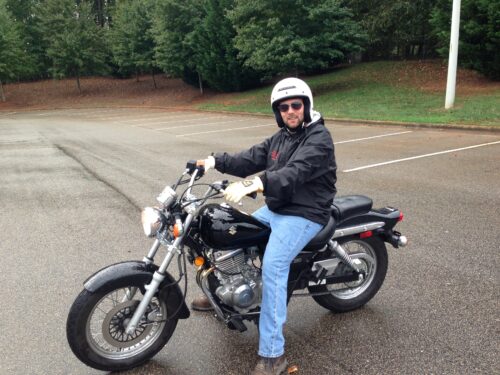 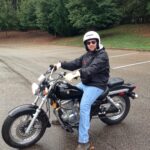 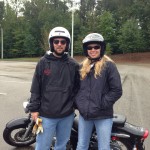 Lets look at a standard road curve. While many characteristics of road design have remained for years, roadway curves changed drastically with the invention of the automobile. Super-elevated roads, for example, were inspired by cant railways, where the two rails are designed at different elevations to accommodate a “banked turn”. As a road designer, it’s easy to check the Green Book to find super-elevation guidelines, but they mean so much more with a bit of experience behind the wheel; anyone who has driven a vehicle faster than 30 miles an hour can recognize the importance of a banked turn. Superelevation can be even more important to motorcycle riders. Leaning on a motorcycle is a fantastic way to appreciate how banked turns work to your advantage and the turns reinforce the importance of getting your spirals, runoff, and runout lengths correct.

Road designers also immediately appreciate other successes and deficiencies of road design while riding a motorcycle. Adequate drainage for sheet flow during a storm, stopping and decision sight distances, pavement cross slopes, the condition of the pavement, and locations of road debris accumulation all become much more apparent. The affect of ANY road condition that could develop into a traffic safety hazard magnifies a hundred-fold, as do the consequences of a collision. Experiencing these road conditions on two wheels can be both humbling and horrifying.

For those more interested in the physics side there is a whole subject on the mechanics of bicycle and motorcycles which explains leaning and counter-steering at high speeds. These, along with the center of gravity of the bike, can be used to calculate the maximum degree of lean possible.

You can probably see where this is going. Three months after I took the MSF course, I bought a bike and took a trip with my roommate from college. Here we are on the Blue Ridge Parkway: 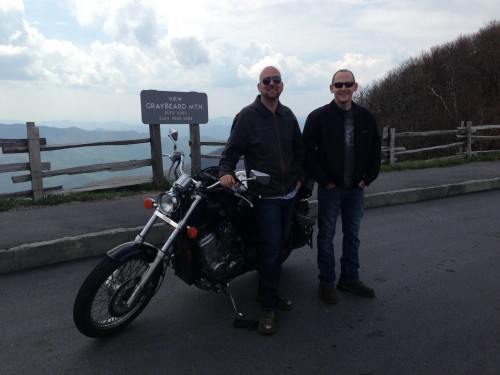 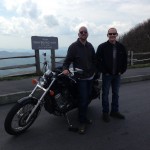 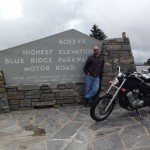 Credit is rarely placed on the experiences many take for granted, so designers and engineers should always be looking for new experiences that share insight into their designs. I highly recommend the experience I’ve had, and I’ll be looking into a class on semis in the future. Perhaps a bit of time behind the wheel of a semi will lead to a better understanding of maneuverability on roads designed without trucks in mind. I encourage other road designers to do the same.

by Mike Roselli |
Comments Off on The Road on Two Wheels |
Engineering, Outdoors

I had a few spare weeks recently, and decided to go on a cross-country trek to visit some friends. I also took the opportunity to take in some civil engineering landmarks along the way. First stop was Minneapolis/St. Paul, Minnesota. Had a great time visiting my college buddy Garrett, now a grad student at U of M. We passed by the Civil Engineering building on campus, a building residing almost completely underground. For it’s unique design it was awarded with the Outstanding Civil Engineering Achievement Award by ASCE in 1983.

I visited the new 1-35W Mississippi River Bridge, the replacement bridge on the site of the disastrous 2007 bridge collapse. Improper design as well as large loads from construction equipment and extra layers of pavement caused the original bridge to collapse. Nearby, I walked across the Stone Arch Bridge of Minneapolis, overlooking the only waterfall on the Mississippi river. Built in 1883 and named a Historic Civil Engineering Landmark, the bridge served as a railway bridge but now serves as a pedestrian and bicycle path across the Mississippi. In the area are many parks that serve the historic district and showcase the history of the water-powered mills that put the Twin Cities on the map.

It’s always exciting to see public transportation improvement projects, and it was neat to see the construction of new light rail stations by the local Metro Transit in St. Paul. We also visited the Town Hall Brewery and attended the Beer Dabbler Winter Carnival 2012. 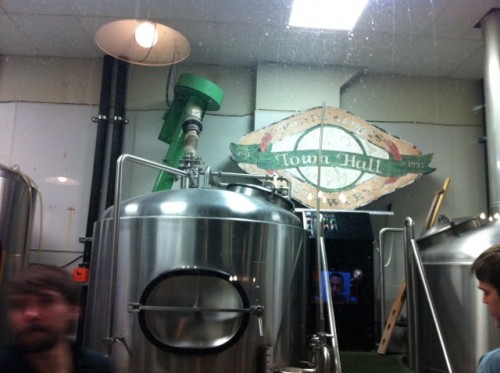 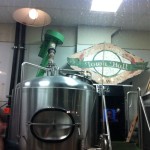 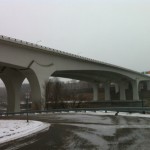 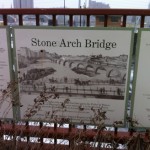 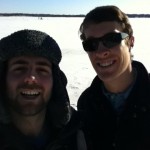 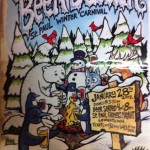 Next stop was Colorado. Not too many civil engineering landmarks on this leg of the trip. Instead, I had the wonderful opportunity to have some family in the area expose me to some really neat experiences. I went ice-fishing, fed buffalo, visited Odell Brewing, and sat in on a volunteer-firefighting training seminar. For those most interested in the sciences, here’s a nerdy exposition: you can calculate the thickness of clear ice h (inches) that can withstand failure from a load of p (tons) with the following formula: h = 4√p

There’s all sorts of other factors you can throw in for safety, and if you plan on driving out on the ice, you should probably give these a good read: 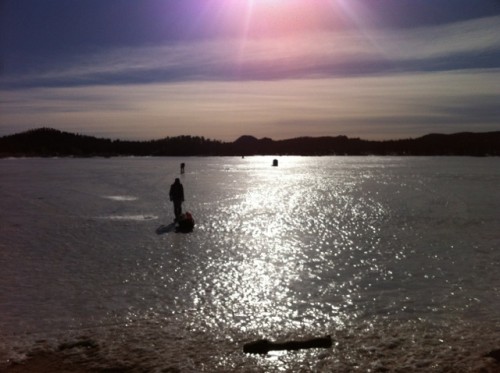 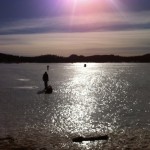 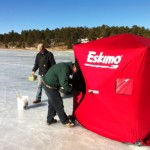 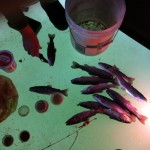 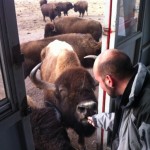 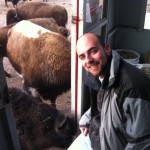 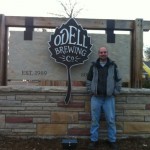 Of course, my visit to the locale wouldn’t do my “engineering” trek justice if I didn’t review local transportation resources. I rode both the Metro Bus and the Metro Rail, visited Union Station, and found it all to be exceptional for my use as a tourist. Joe commutes to and from work daily via Metro Rail and bicycle (which he can bring on the train) and finds them more than adequate. I was impressed with the timeliness, cleanliness, and usefulness. I only wish we had this kind of rail in Raleigh.

I also noticed the use of ramp meters both here and in Twin Cities. These are not a congestion tool we currently use in North Carolina, so I sent a quick email to Dr. Hummer, professor at NC State, with some questions on use cases and statistics. He responded rather quickly and gave me great information on the topic. They can keep the mainline traffic moving better than Level of Service “F”, preventing a 100-300 vehicles per hour per lane drop in capacity. They break up “platoons” of cars, and can decrease travel time up to 10%. In North Carolina, it’s been easier to add conventional capacity in the past, but NCDOT may need to look at ramp meters more closely for use on I-77 in Charlotte and areas around RTP.

All in all, the trip was very rewarding, and I can’t wait for the next opportunity to do a similar trip in the future. Special thanks to family and friends for taking time to spend with me and making my trip possible! 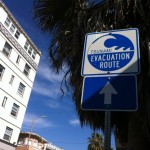 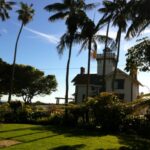 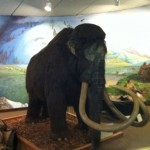 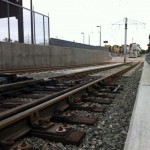 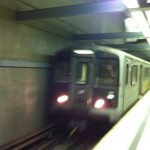 by Mike Roselli |
Comments Off on Engineering Trek 2012 |
Engineering, Outdoors

In Colorado for Labor Day Weekend. Kim and I took a trip up to the Rocky Mountain State Park today and hiked up to Alberta Falls. Unbelievable. Pictures can’t express what you can see here. Also met Lars and Henriette at the continental divide, as they continue their wild trek from Alaska to Argentina on motorcycle. Keep going guys, you can make it! 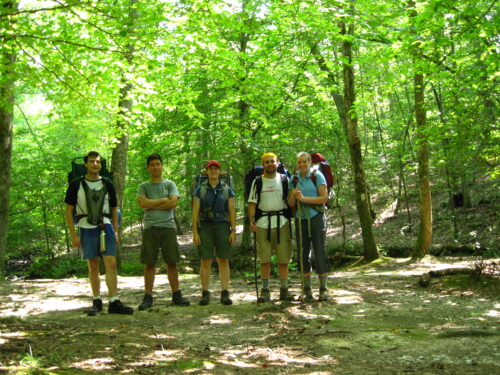 Went backpacking last weekend in Uwharrie National Forest. I forgot just how far twenty miles was with a pack. Talk about hot, I also forgot why I hadn’t backpacked in the beginning of August before. Made stroganoff at camp with the trusty Whisperlite, and we filtered most of our water from the streams we crossed. Looking forward to revisiting the trail in the fall when the leaves change color!

by Mike Roselli |
Comments Off on Backpacking Trip |
Outdoors